Having had Vane in my class on numerous occasions, I’m delighted he is getting recognition. Incredibly energetic, engaging, and makes connections with the kids almost immediately. A true example of Engage, Inspire, Unleash! 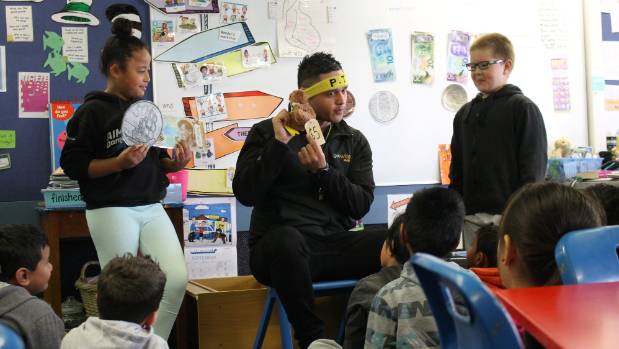 The ASB GetWise facilitator spends his days teaching money literacy to pupils, largely in the Wellington region, and has just reached a big milestone.

On Thursday, at Rangikura School in Porirua, Sopoaga delivered one of his workshops to his 100,000th pupil.

It’s a huge number, he says, achieved over six years of “just preaching the good word of financial literacy”.

In total, he has delivered more than 4000 workshops to more than 257 schools.

With a background in dance, performing arts and social work, Sopoaga – and his personas of Captain Cashtastic and P.T, a personal trainer – brings energy and fun to the classroom as a way of teaching kids valuable lessons.

“Think of this age, right now, and where they are. If we can have the ability to just nudge them, just gently, into a positive direction where they’re going to make some better financial decisions, it can have a huge impact on their lives.

“Obviously knowledge is key and then trying to motivate them to have better decisions, it’s got to be a positive thing.”

Teaching money literacy in schools is a relatively new concept. ASB began its GetWise programme in 2009.

Sopoaga says he didn’t learn anything he teaches during his school years.

“I never had that growing up … I saved up my whole primary and intermediate years and I ended up saving $8.80,” he says.